At the time (2008) these were the indicators of the start of the path up the hill.

It’s hard to know why the story of our wee trip in April 2008 to the Corbett, Beinn Each, was never written.  I found it one of the most enjoyable half day walks we ever tackled, courtesy of a mere 2m of bog…one of the lowest bog counts encountered on our travels.  Maybe its omission was due to our busy hillwalking schedule or perhaps because the walk was so short it was damn near impossible to create a decent back story – something de rigeur for the Fatdog “Tails” of that period.  In those days the “Tails” appeared on the forum scottishhills.com.  It would be another 8 months before the first incarnation of Where The Fatdog Walks would hit the blogoshere.

What the day lacked in headline news it made up for in both weather and views from the summit, although they were a bit on the hazy side for decent photographs.  However, the highlight of the trip had to be lunch – venison pies from Mhor Bread in Callander.  I am salivating as I recall those juicy meat and veg filled, pastry-lined, treasures.  Food like that made it a day for lazing around and enjoying the experience while at the same time taking in the superb view across Loch Lubnaig to Ben Ledi.  The Fatdog’s drool did detract somewhat from the moment but you learn to put up with such minor inconveniences when faced with such culinary magic.

It was an effortless hill; a short section of forest path (some say creepy and gloomy) from the A84 at Ardchullarie More on the edge of Loch Lubnaig; a quick meander along the old estate track in Glen Ample; then at the cairn (and stone arrow) onto the narrow path up the grassy slopes of Beinn Each itself.  A whacking great total of 6.5km!  That must be one of the shortest round trips for a hill from one of the major Scottish hill groups.

I would love to do it again…but not at the minute.  First of all getting the pups out of the “Tank” next to the busy A84 gives me the shivers just thinking about it…then there are the sheep in Glen Ample.  God knows what the wee delinquents would make of them.  But it’s still a great little hill…doable even with my sciatic niggles.

Click on the first photo to bring up the carousel.

The Fatdog heads off up the Glen Ample track. 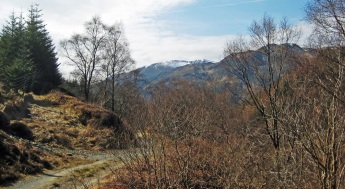 The track has great views back to Ben Ledi 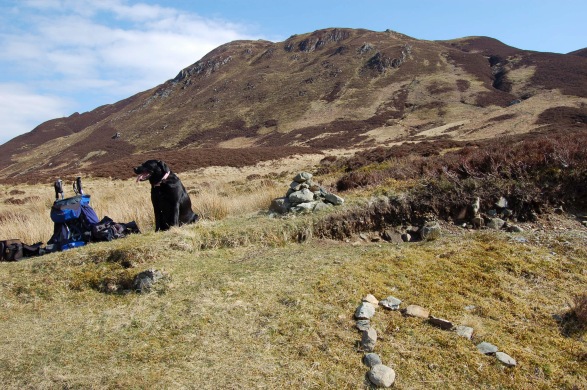 At the time (2008) these were the indicators of the start of the path up the hill.

Beinn Each – it has a great look to it that tells you it’s not going to be a hard day.

The track winds its way up the midsection of the hill.

Looking down into Glen Ample from our lunch perch. 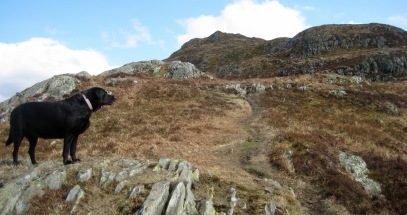 Stuc a Chroin from the summit of Beinn Each. These were the days when I was sorely tempted to follow the ridge around to the neighbouring Munro. Wisely I opted for an easy, lounge about day.

Looking west to the Munros of Stob Binnein and Ben More

Ben Ledi – always difficult to photograph to the south. 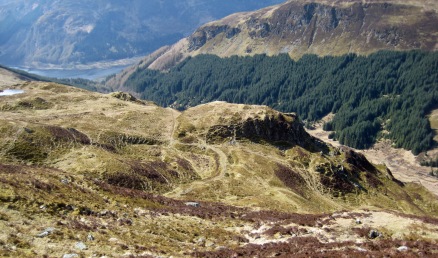 How the track winds up the second part of the hill.

I did contemplate a wee wander along the south ridge…but I sensed bog!

FD reckons we’ve done enough for the day and heads for home.

Now it's your turn... Cancel reply

Begin typing your search above and press return to search. Press Esc to cancel.