You would think by now that rattling out posts for the blog would be almost second nature.  Not so.  The best we’ve managed in a fortnight is a somewhat bland Merry Christmas message.  It would appear that the media powerhouse that is The Fatdog Broadcasting Corporation has slipped into a festive stupor.

It’s not that we don’t want to produce a gripping “tail” of man and dog against the elements…it’s just the elements have been so bloody awful that there’s no feckin’ chance of getting man and dog out in those sort of conditions.  Have you heard that wind out there!

So…after a week or so of Christmas/New Year hols we find ourselves on the horns of the proverbial dilemma.  Should we churn out a meaningless post – just for the sake of churning one out…or wait until something nice and juicy comes along that we can sink our teeth into and thus impress everyone with our slick presentational skills?   Ok, maybe the use of slick and skills in the one sentence was a tad optimistic.

I do wonder though what constitutes a meaningless post, that anathema to those inhabitants of “other places”.  It could be argued that, in that last sentence, this post is on the verge of slipping down the slippery philosophical slope into meaningless oblivion.  I’ll stop here and settle for the inclusion of a meaningless paragraph rather than go the whole hog.

Has been postponed indefinitely.  It was to have included a number of photos and portrayed events that included Graeme, my walking buddy from those early days.  Having found out about his passing just after publishing Part 1 I feel that it’s the wrong time to let loose my somewhat flipant writing style on a rewrite of those particular times.

ON THE OTHER HAND…

I do have a review to write on a Paramo Men’s Mountain Vent Pull On  provided by Go Outdoors and to be found under fleece jackets , thermals , base layers on their website.

Sadly I haven’t yet had the chance to give it a decent outing to see how it performs.  First impressions are that it is a cosy, well made, base layer.  I’m not sure about the functionality of the pocket, the underarm zips and the cuff poppers.  Seems like overkill to me.  But I’ll keep an open mind on that until I give it a decent test run.

SO HE’S WRITING ANOTHER GEAR REVIEW (sigh)…but all is not lost…we still have Mr.P!

Far more exciting than any gear review – MrP has sent in a new adventure for inclusion on the blog!  Sadly this means hours and hours of endless work by our editing team here at the Corporation, translating the text from the Ancient Derbyshire into a modern language format.  Anyone reading from Scottishhills.com – this story will be different from the original “shills” text so you’ll be getting an exciting new perspective on Simon’s travels where he tackles wild camping and night walking…and bleats a lot about the general miserliness of his employer.

MEANWHILE AFTER THE STORM…

FD and I did venture as far as Plean Country Park today to find a number of familiar old trees no longer with us.  The storms of the past few weeks have seen the main track blocked by fallen trees after every storm – today was the worst.  It looks like Scotland’s Central belt has taken a bit of a pasting this morning.  We arrived about midday – after the winds dropped.  There was a strange absence of dog walkers…wonder why? 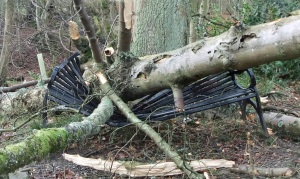 AND A POSSIBLE UPTURN OF EVENTS!

The past few weeks have been a bit frustrating.  Between rain, wind and family gatherings FD and I haven’t had a chance to get out for a testing walk.  Her arthritis tablets have been working amazingly well (which I hadn’t anticipated) with no obvious limping during walks.  This throws up an unexpected turn of events.  Last year she limped for so long, even after starting her tablets, that I had no option but to stop her hill walking (much as she really enjoyed it).  While I reckoned I could get myself into the mountains, albeit a bit slower than before, with both of us hobbling there was too much to go wrong.

Now I’m hoping to get some low hills under our belt this month as a trial run and, as long as Maisie shows no signs of trouble, we’ll up the ascent and distance slightly in February.  If that works out ok we’ll be looking at 12km round trip and 700m ascent by April…fingers crossed.

From my own point of view last year’s dramatic power loss in the legs when traversing bog and steep fine scree paths has to be remembered when plotting routes.  While the perpetual ache in the leg muscles increased again last year I’m gambling on pushing through it, irrespective of how it feels, on the basis that it always improved part way into hill walks as the muscles warmed and stretched.  Will the muscles do the same this year?  Who knows.  At worst I’ll be a much fitter creature than I was before I started.  😀

Now it's your turn... Cancel reply

Follow Where The Fatdog Walks on WordPress.com
Join 66 other followers

Begin typing your search above and press return to search. Press Esc to cancel.